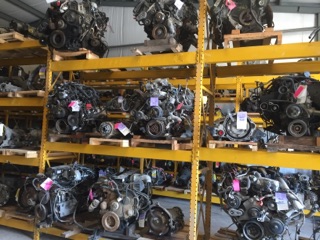 From 1936 to 1958, Walter P. Wyen was the owner of the Xenia Auto Wrecking company. He gained valuable knowledge about the used vehicle parts industry during these years. Walter decided to close down this business in 1958. In May of 1960 after his sons graduated from school, he started Walt’s Auto Inc. after he purchased 32 acres of land in Springfield, Ohio.

Walter operated the business back then with the help of torch wagons and boom trucks just as the other salvage-yard businesses did at the time. The business began to grow and by 1977, it was time to update the business. Walter did so when he bought new equipment such as a MAC crusher and a large forklift. Sadly, Walter did not live to see the full success of this company, as he died in 1979 during the summer. Family members continued on with the operations of Walt’s Auto Inc. and ensured its success.

Another upgrade came through the addition of the AIMS Inventory System. We were subsequently able to keep track of our inventory in an organized manner then with tags and cards. It was not until 1985 that our present 20,000 square-foot facility was built on the land. Inside this facility, we created our office, sales, showroom, warehouse, dismantling and stockroom areas. The business grew to the point that we found the need for the Hollander Computer System to be installed in 1986. We were pleased that we tracked and organized our inventory, so effectively, with this system as soon as we added it to our facility.

Present Status of the Company

Today, we continue to improve our equipment, inventory system and overall organizational methods to ensure all customers receive a high level of service each time they turn to us for used vehicle parts or re-buildable vehicles. We operate with a staff of 26 people, including 8 family members. Our company also utilizes the following equipment and computer systems:

Customer Base, Delivery and Shipping Info

Our automotive customer base consists of car dealerships of both new and used vehicles, service shops, body shops and retail customers. We provide parts delivery within a 100-mile radius of our location. Additionally, we ship nationwide in the U.S. through carrier lines or UPS.

Walt’s accepts MasterCard, VISA, and Discover credit cards and of course, cash as payment options. Most of our parts come with a 90-day warranty for your protection. Check with us on your particular parts.

When You Turn to Us

When you turn to us for parts, our computer system quickly locates the ideal ones for your needs, even if they are across the country. In minutes, we will be able to tell you if the parts are here in the warehouse or a different location. Once you order the parts, we will schedule shipping, delivery, or pickup arrangements for you.

We Are Highly-Skilled Professionals

With almost 55 years experience in the salvage industry, Walt’s Auto Inc. only hires highly skilled professionals to dismantle the used vehicles to harvest all viable parts to sell. You reap the benefits of this expertise when you turn to us for used parts. We will help you analyze the parts you need for your specific make and model of vehicle. Our staff members provide quick, reliable and courteous service every step of the way. In addition, remember that we also sell rebuildable or used vehicles.

Check out the rest of our website before you visit elsewhere online to discover additional information about our company, how to contact us, and our services. We want to be the first salvage company you think of when you need used auto or truck parts. Our company handles all makes and models of vehicle parts, so do not hesitate to reach out to Walt’s Auto for your needs.